BitCoin. Everybody wants some. But what’s the best way to keep it safe once you’ve got it? And how to get it? 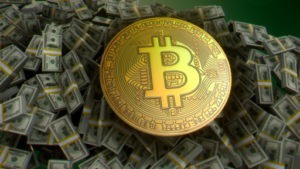 First things first – you get BitCoin (and Etherium, and DogeCoin) from a cryptocurrency exchange, like you would from a “regular” currency exchange to turn your dollars into Yen, or Euros. Business Insider and Forbes both have a list of the exchanges that handle cryptocurrency (like Bitcoin), who they think is best, and why.

Now that you’ve got some virtual coin, where do you put it? Well, you can leave it with the exchange and use them as your bank to buy, sell, and store it. Or you can use a digital wallet to store it on- or off-line.

Like so many things, it depends … but let’s look at the safety of cryptocurrency itself, in the form of Bitcoin, or “BTC.”

If this were a ping-pong game, you’d need a neck brace by now.

It depends on the time frame. Like the stock market (though logarithmically more volatile) it seems like it goes up in value for the long haul. If you had bought BTC 10 years ago, you would have made more than 400,000 times your original investment. If you bought it three months ago, you would have lost half your cash. For the short term, it’s pretty unpredictable.

Will it become less volatile?

Possibly. Various governments are working on regulating it. Wall Street brokerage houses are working on finding rules to adopt it and force some of the uncertainty out of it. The country of El Salvador has adopted it as legal currency. It seems like regulations to tame its volatility are right around the corner. But this means speculators won’t be as interested, some of the volatility will go out of it, and it may stop having these huge run-ups in value. Still, my crystal ball is broken, and nobody knows when/if these changes will happen.

So, with that caveat, let’s move onto the safety of various forms of storage, and steps for safety.

The cryptocurrency exchange where you bought it.

You’ll want to do some due diligence as to the safety record of the exchange where you would be keeping it. Some, like Mt Gox, lost millions in clients’ cryptocoin. At one point, this exchange was handling the great majority of BTC in the entire world. Then it stopped trading, went bankrupt and announced that 850,000 BTC were missing – possibly stolen. At the time, the stolen funds were worth $450 million (right now, they’d be worth $28 billion) and less than a quarter of that has been recovered. Centralized cryptocurrency exchanges that hold your BTC are constant targets of hackers. But they are also likely to have expertise in security, while we normal people don’t. So, weigh your chances.

A hot wallet – online wallet – is meant for small amounts of cryptocurrency (like a checking account vs savings). It’s connected to the Internet, for easy use. Because you don’t keep large amounts of BTC in it, if it gets hacked, you haven’t lost much. Investopedia has an article called The Best Bitcoin Wallets of 2021 that picks and reviews favorites for different types of use: beginner, advanced, mobile users, etc. They’re a pretty reliable source for such reviews.

Just remember, if your account or your wallet is hacked, there’s no insurance like FDIC for being sure you get it back.

That’s why you might want to use a Cold Wallet for larger amounts of BTC. A cold wallet is not connected to the Internet. ZDNet has an article called Best Bitcoin Hardware Wallet in 2021 that picks and reviews five hardware wallets. They’re a pretty reliable source for such reviews as well.

To keep a cold wallet extra secure, you might download it to a brand-new USB flash drive that has some built-in security. Then reset a computer (any old one should do) to its original settings, don’t connect it to the Internet, and load the cold wallet onto that computer. Keep it off the Internet forever.

Techradar has a review of what they think are the best ones these days, called Best Secure Drives 2021: Top USB Drives to Protect Your Data.

It is possible to purchase static hardware – designed in many cases to resemble the kind of coins we’re used to. You know – round wafers of metal with artwork on them. But seeing as governments aren’t particularly keen on letting individuals mint their own coin, most of these physical coins act as a “tamper-proof” way to physically store a private key for accessing digital funds, rather than a container of funds themselves. It’s tamper-proof not because it can’t be tampered with or stolen, but rather because the act of accessing the hidden private key it contains – be it under a sticker or a hologram or a scratch-off – shows that it’s been tampered with.

Some early physical cryptocoins, such as Casascius physical bitcoins that were invented in 2011 and discontinued in 2013 was a container for some value of crypto funds themselves. But the US Treasury Department’s Financial Crimes Center (FINCEN) decided that this made Casascius a money transmitter business. As such, its creator, Mike Caldwell, would have had to have obtained various licenses and registrations he didn’t have. This changed the nature of physical coins so that they only held keys and were not a container for crypto-cash themselves. Other physical BitCoins are made from precious metals and have a certain amount of value for that reason, but still the value comes from whatever cryptocurrency is associated with the digital key that the coin contains and is hiding.

For now, the conventional wisdom is that physical cryptocoins are a novelty.

So, where does that leave us?

So far, in the long term, BitCoin has increased in value an incredible amount. Like real estate, there is a limited supply and so, much like real estate, the value generally increases over time. However, unlike real estate, it provides value but not a roof over your head. You don’t need BitCoin to live, and you generally do need some real estate for your house, or apartment, or hovel. Nobody needs BitCoin, so there’s a certain amount of whim to its value. That said, as we’ve seen above, it’s increased in value by about 10 with eight zeroes after it. And yet, there’s simply no guarantee it will keep increasing in value at all.

In the short term, it’s just another way to get ulcers.

It’s digital, so it’s hackable, but there are ways to diminish the risk.

In summary, it is not for the nervous, neurotic, or faint of heart. It is probably good thinking to have in a diversified set of investments, and you should probably have your crypto in more than one place.

Remember, it is still kind of the Wild West in cryptocurrency land.

Don’t miss a single issue of our informative newsletter … Subscribe!

Email as a signed contract vs. fraudulent emails We all send and receive email, but did you know that what you say in an email can be interpreted as a legal contract? And that sometimes, emails are fraudulent? Both are true. The Statute of Frauds Although email didn’t...
Read More

El Salvador Adopts BitCoin copyright Steve Burgess, 2021 El Salvador just passed a law to make BitCoin (BTC) legal tender and is the first country to do so. It did something similar back in 2001, when it made the US Dollar the official currency, replacing the...
Read More

California defines a cyberbully as anyone who sends any online communication to deliberately frighten, embarrass, harass, or otherwise target another. The Cyberbullying Research Center defines it as “willful and repeated harm inflicted through the use of computers,...
Read More

Cybersecurity & Covid-19: Vulnerability and What to Do About It

Cybersecurity & Covid-19: Vulnerability and What to Do About It Steve Burgess, 2020 As if we didn’t have enough to worry about. With so many of us working from home (close to 90% of American corporations are encouraging or requiring employees to do so) and having...
Read More

by Natalie Miller, 2019 With Indian Summer temperatures rising, here are some tips to help you make sure your devices are ready to conquer these warm days of Fall like you are. Check Those Pockets! Taking a dip in the pool, going for a paddle in a kayak, and jumping...
Read More

by Natalie Miller, 2019 With new models of phones and computers being released every year, wanting the latest and greatest is never a bad thing, but what about your old devices? The truth is that old devices can still hold all of the data you put on them or that they...
Read More

The Case of The Client Who Wanted … to be Wanted

The Case of The Client Who Wanted … to be Wanted copyright Steve Burgess, 2018 It was nearly Christmas, but the morning sun was pouring in through the windows of my Central Coast office, casting shoe-shaped shadows on the West side of my desk. Perhaps I should have...
Read More

Fitbit, Fun, Forensics, and Foes Have you tracked your 10,000 steps today? Has anyone else tracked them? Fitness trackers are big business, helping people get and stay fit, and helping them share their progress with friends – and sometimes with strangers. The...
Read More

The Rise of Cybercrime and How to Prevent It

The Rise of Cybercrime and How to Prevent It (guest article contributed by Josh Wardini, of  Webmastersjury.org) As people are leaning more and more towards the digital world, cybercrime is becoming an issue that cannot be ignored. Although many individuals and...
Read More

Fitbit, Fun, Forensics, and Foes by Steve Burgess, 2018 Have you tracked your 10,000 steps today? Has anyone else tracked them? Fitness trackers are big business, helping people get and stay fit, and helping them share their progress with friends - and sometimes with...
Read More
← Previous Next →