The Case of the Deadbeat Beauty

Not everything always works out in Forensicland. Sometimes we strike out. In more ways than one.

I was gazing out the tall windows of my office at the blue, blue Santa Barbara sky, with nary a cloud in sight. It was my 50-something birthday. The bills were ignored. It seemed like a perfect day.

Then the phone rang and a delightful voice answered. Ginger Justín. She laughed; she loved my jokes; she thought I was brilliant. She said I was perfect for her. As an expert. I reminded her of her dad. Her deceased dad. I should have taken the cue.

Something had to be done. The poseur had to be exposed before she took yet another old man’s fortune. As Ginger informed me, this was Dallas’s M.O. Get to know the old guy, move in with him, become a love interest (“She never loved him; she was just after his money!”), then help him shuffle off the planet when the time was right. Ginger’s legal eagle, Big Dan Tuberosa, concurred. “This is a bad woman, this Dallas. She must be stopped.”

So I asked for a catalog of devices that might hold various versions of the will. Mr. Justín had quite a setup. Racks with networking gear upstairs and down. Several computers and laptops. Lots of backup hard drives. Ginger asked if I could pick them up at estate administrator, John Geering’s place in Silicon Valley. And if I could cut this poor heroine break on the price.

Thirty years of being in the biz has taught me the hard way that when someone tries to wheel & deal with you, it’s a red flag. Every dollar discount seems to come with a five-spot decrease in respect. It’s an odd part of human nature that giving away a C-note makes people think you’re an easy mark. But her desperate charm kicked in and I said I’d pick the gear up next time I was up that way. It turned out that Yahoo! News wanted my input for an online interview/article called: “True/False: Never Sell Your Old Phone,” so after the interview, I went to Geering’s nearby digs to fetch the stuff.

When I came downstairs from his office, there was Ginger, waiting to greet me. She was long, lank, and lean, except where it counted. Her flaming red hair was alight with the afternoon sun. She leaned up against me with a languid, lasting hug and asked me to share a beer at a local sidewalk café, where we could discuss the case.

I picked a table outside, in everyone’s view, just to play it safe. A local Firehouse IPA cooled my flushed face and settled my nerves enough to unaddle my wits. The roar in my ears subsided. I heard more about how much Ginger’s dad loved her. I heard more about how her siblings (the ones still mentioned in the Will) were relying on her to get the real story out, in their father’s memory. I heard how Ginger had to do this all by herself. I heard more about the evil Miss Dallas. I heard how this case would be worth tons of money and couldn’t I do part of my fee on a contingency basis?

As it turns out, expert witnesses are not allowed to work on a contingency basis. The image of the hired gun would be inevitable. Regardless of the circumstances, being paid by how much you win just doesn’t fit with the ethics of complete honesty on the stand. Like the Lamas teach, attachment to the outcome just causes suffering.

We still had the matter of a contract and a retainer to deal with. Big Dan assured me that Ginger was good for it, but it’s never a good idea to get started without something written down. She signed the contract and cut me a check.

With this behind us and some tech talk put into lay terms, we decided on a strategy.

She thought two computers (with 3 disk drives) would be most likely to bear fruit.

• I would, of course, make a forensic image of each of the hard disks, using FTK Imager through a write blocker.
• Do a keyword search with EnCase for terms and phrases taken from known versions of the Will, and provide the results as a spreadsheet for each search term.
• Recover deleted files.
• Look for Willmaker documents, including by finding a hexadecimal signature for those files, then search and carve them out with Blade.
• Find when and on which computer there had been Wills created, modified and accessed.
• Provide a complete listing via spreadsheet of all files with Creation, Last Written, and Last Accessed Dates, amongst other file attributes.
• Dig up all existing and deleted History entries, using NetAnalysis and HstEx
• Find what USB devices had been attached to each computer (in case there were more discoverable devices).
• Find out if file-wiping software had been installed.

As you might imagine, it took a bit of time and produced a whole lot of electronic documentation. This much data would take out a significant chunk of forest if I sent it as printouts. That many reams of paper aren’t free, and as I wasn’t working pro bono, the time to print it out wouldn’t be free. Facing the reality of having to pay for my time, Big Dan and Ginger agreed to take it as files even though they didn’t want any electronic correspondence to be able to be traced later. They wanted email communication to be mute on the subject of what we found. The CYA alarms inside started buzzing. More flags started going up… 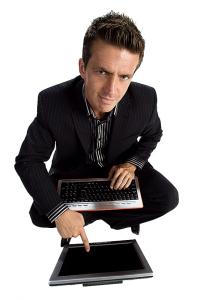 Ginger spent many hours trying to sort through the data. I spent many hours on the phone explaining. She was bright, but her head just wasn’t built for electronic spreadsheets – it was built for storytelling, and she composed a storyline to fit her narrative.

When I explained that the facts didn’t fit, she asked me in a throaty voice if I couldn’t please, please make this one adjustment to what I though the data meant? Through more red flags, I had to assume she was pulling my leg. The data is the data. As a famous TV cop once said, “Just the facts, Ma’am.”

The defendant’s counsel agreed to take my deposition over the phone. When an attorney is getting ready to try to take me apart, I like to be able to read his body language, so phone depos are not my favorites. I could hear Big Dan and Ginger in the room, along with the other lawyer. We got into the subject of what modification, creation and access dates meant. As I explained, I could hear Ginger ask for a break to check on her son, who she said was sick at home.

Then, my office phone rang and the number was hers! Her son was fine. She had called to try to change reality a bit. Though she had trouble finding her way around a spreadsheet, she insisted I was wrong in my testimony about file dates. I had to explain that I did know a thing or two about them, and that I had performed the experiments myself for confirmation. She had as well, she said, and I was wrong. I’ve got to admit, I was a little rattled. I tried to explain that Windows 7 and XP treat certain dates a little differently. I had to stick to my guns, and Ginger was furious.

Still, they decided to take it all the way to court. Ginger prepared a stack of shreddable paper spreadsheets and faxed them to me. Now I was the one having trouble interpreting spreadsheets as I couldn’t make hers hold together. I did my best. No one wants a beautiful woman to think they are being scorned.

Then she faxed me about a 100 points she wanted me to testify to. I spent more hours explaining that there were many things in there that I simply couldn’t say. I felt I was on a debate team. I should have quit then and there, but I stuck with it until she said -in writing – that if I couldn’t answer a particular point a particular way, she insisted that I say I didn’t know the answer. Even if that wouldn’t have been the height of an ethics breach, it would be perjury.

I called Big Dan and told him I was taking myself off the case and that he really ought to tell his client not to ask an officer of the court to perjure himself. But Dan was still a believer in this terrible temptress. And court was looming. I let myself be talked into going to court under the following circumstances: Ginger wouldn’t talk to me any more – only lawyer Dan; nobody would try to influence my testimony, including Big Dan; and I had to receive immediate payment to cover the long-overdue bill as well as upcoming testimony.

Done and done. I un-quit. Would that the agreement was kept.

What should have been a few hours on the stand turned into two whole days. Ginger sat with her lawyer, scowling, shaking her head, and otherwise trying to get me to say the “right” things. Every one of her experts and her attorney and the judge was a doofus, and every one of the opposition’s was brilliant. The breaks were full of accusations and this pretty woman who could make so many people dance to her tune just couldn’t get the facts to say what she wanted them to, no matter how many times she changed her mind about what they ought to mean.

They asked me to stay another day as a rebuttal witness to the next guy, but I just couldn’t. I had to deal with reality and appointments.

Well, in the end, I was left holding the bag for a day’s court billing – and karma caught up with the toxic temptress. Maybe it was her histrionics, her fluid way with the truth, or just that Daddy had written her out of her inheritance for some odd reason. But after more years of working the court system, the evil Lynn Dallas ended up with what the Will deeded her and the shifty siren got a share of Karma.

So now I sit, meditating on flags and signs and that blue Santa Barbara sky. Paying a little closer attention to what the universe has to show a guy that makes his living digging up the truth with a forensic spade. Trying to see what’s coming before the almighty has to hit me in the forehead with a sledge hammer to get my attention. And keeping the fancy duds pressed for that next court date with the facts.